Walnut Valley Festival invites you to take part in our Feisty Music Camp for Kids! The two-day event will give children the chance to take part in hands-on, music-related crafts, workshops and concerts.

Walnut Valley Festival thanks  Great Plains Dulcimer Alliance and Winfield Arts and Humanities Council for letting us borrow instruments again this year and for their support of Feisy Music Camp for Kids. 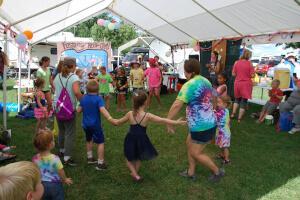 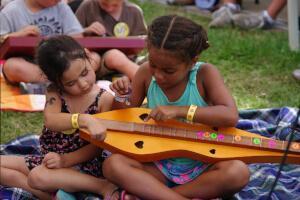 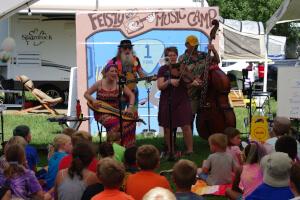 The camp welcomes kids from pre-school through 6th Grade

Each session will have a theme or focus to give kids a chance to choose which activity they want to do. 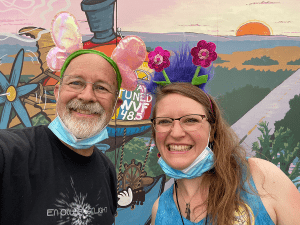 Music Camp Organizers Erin Mae and Aaron Fowler will be organizing and operating the camp, and all have a wealth of experience to draw on.

Erin Mae has brought American music education into public schools, home school co-ops, libraries, churches, foster care programs and summer camps. An accomplished musician, she won the national Mountain Dulcimer Championship at Winfield in 2004. She went on to study classical piano at Sterling College, KS, before pursuing a degree in commercial music, with an emphasis in bluegrass and acoustic jazz, through South Plains College in Texas. After graduation, she began touring full- time as part of the duo Scenic Roots.  Erin is now a full-time free-lance mountain dulcimer and kids folk music educator.

Aaron Fowler is a touring musician, storyteller and teaching artist. He has been making music since he was 16 years old! His greatest joy is getting folks to sing together. Whether a group of 4-year olds in a preschool classroom or a group of elders in a Hospice center, the world is changed when we make music together. Aaron is member of the Wolf Trap Early Learning Through the Arts, National training team (Vienna VA), a teaching artist with Arts Partners (Wichita, KS) a Young Audiences Affiliate and a national touring singersongwriter. Aaron is a member of Local 1000 and serves as the US Vice President of the American Federated Musicians Local 1000 Touring Musicians union.